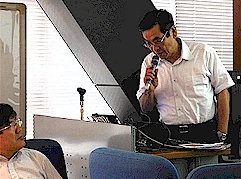 
We earlier reported our findings from our 1st meeting on April 18. Yoshioka, Fuchigami, Furukawa and Iino followed the meeting with a number of discussions, sometimes with experts from outside our association, to clarify the questions we posed ourselves on our study group. The questions are the following two:


We answered the first question with a conclusion that "Those at Fukushima NPP could have foreseen the high tsunami that followed the huge earthquake." The following report gives the detail:
Study on Tsunami Preparation at Fukushima NPP – Interim Report (Question 1) (in Japanese)

It is regretful that TEPCO and the regulating body, without assessing how to avoid a severe accident in case 15.7m high tsunami waves hit Fukushima 1, denied the tsunami itself. It is one of the lessons of the Study of Failure; "People do not see what they do not want to see."
Our next task was to seek an answer to Question (2). Our discussions that followed the 1st meeting led us to conclude that if the plant had stocked 125Vdc batteries to a sufficient capacity, the core damage of Unit-1 that started a few hours after the tsunami attack could have been avoided. This would have been a measure to extend the plant life by 1 or 2 days. We further stated that the hydrogen explosion of Unit-1 on the 12th, that ruined the accident measures underway for units 2 and 3, could also have been avoided. Details of this part of our analysis are in the following report.
Study on Tsunami Preparation at Fukushima NPP – Report 1

If 125Vdc batteries had been stocked, measures to take after the tsunami attack were as shown in the next figure. The figure shows the case for Unit-1. Units 2 and 3 have Reactor Core Isolation Cooling (RCIC) system in place of Isolation Condenser (IC). 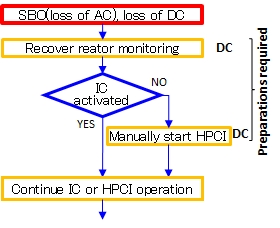 Fig. 1 Emergency measures 1F1 could have taken to avoid
severe accident if it had stored 125Vdc batteries
Nonetheless, hooking DC batteries to the HPCI valves to open would not have been straight forward with switchboards submerged under water. Simply connecting the batteries to the supply lines would short-circuit them to turn the batteries useless. They had to disengage the DC connection to the switchboards before supplying voltage to the valves. For the operators to quickly make these actions, they needed to have training experience of tsunami attack, SBO (total loss of AC) and loss of DC power due to submergence of the switchboards.
A topic was explained during our meeting; the behavior of Unit-1 IC, with closed valves failing to provide its condensation function. There has been a number of blames on the fail-close logic originally intended for safety. This logic to close the valves, however, was natural because the valves were designed to close upon loss of power to the instrumentation to detect any leakage from the IC piping. The IC piping was routed to outside of the containment vessel (CV), thus, loss of power to its sensing system for leakage detection from the piping was only logical because power loss meant that the system lost its way of detecting leakages.

Our meeting this time, led to the conclusion that emergency DC supply was insufficient to reach the state of Cold Shutdown. Cold Shutdown would additionally have required, at least, AC power (preparation of AC power truck) and an ultimate heatsink with residual heat removal (RHR) function either through repair or an alternate system. The following discusses the detail.

HPCI and RCIC uses water in the condensate storage tank (CST) or suppression chamber (SC). Fukushima accident had lost the seawater pumping capability, thus, ways to release heat from CV was lost. The decay heat would gradually raise the system temperature and HPCI or RCIC cannot keep cooling the reactor for an extended time. Fukushima-1, just like Fukushima-2, needed to switch its cooling function to residual heat removal (RHR). If Unit-1 escaped the hydrogen explosion and the operators acted quickly, There was a good chance of activating RHR within about 10 hours after tsunami without having to rely on lowering reactor pressure vessel (RPV) via safety/relief valves (SRV) and CV venting (see Fig. below). 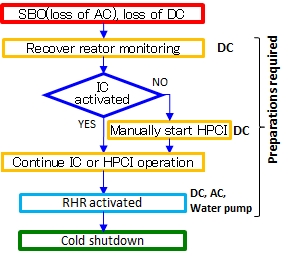 Fig. 2 Procedure to reach cold shutdown if the plant was ready
Units 1 to 5 of Fukushima-1 (1F1-1F5) had RHR systems consisting of RHR loop that drew reactor water from upstream of the recirculation line pump, dumped the heat at the heat exchanger, and returned the water to downstream of the recirculation line pump and the reactor, and another loop, the RHRS loop (Fig. 3) that circulated seawater to the heat exchanger. The RHR loops were on the ground level or above to escape the earthquake/tsunami damage and their functions were lost due to loss of AC power to the RHR pump driving motors. RHRS loops, on the other hand, lost their functions with their motors inundated. The seawater pumps were located 4 meters above O.P. (Onahama Peil), thus, it was easy to foresee that 15.7m tsunami waves would kill the RHRS function. 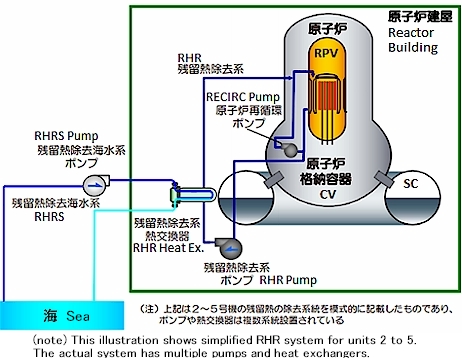 Source: "Damage and current status of NPP after Great East Japan earthquake," TEPCO
(http://www.tepco.co.jp/nu/fukushima-np/outline/pdf/f12np-gaiyou_1.pdf)
Fig. 3 The RHR systems of 1F had 2 loops including the seawater loop

From the above discussion, we concluded that the RHR functionality could have been restored within about 10 hours, if 1F had prepared high voltage AC power supply truck (enough to supply AC to RHR loop and RHRS loop of each reactor), and RHRS loop spare motos, or in case the RHRS loop motor was too large for urgent replacement, temporary power supply and water pumps like the ones used for 1F5 [Reference 1, p64].

The following preparation against earthquake and tsunami would have significantly raised the probability for severity avoidance during the Fukushima-1 accident.
Next, we will discuss how we could have prepared further to raise the probability of accident severity avoidance.
Fig. 1 and 2. show to manually activate HPCI, in case Unit-1 IC (RCIC for units 2 and 3) was lost. HPCI, however, has only 1 system and if it had been damaged, e.g., by the earthquake, the above proceedures had no alternative way to take. The RCIC valves for units 2 and 3 open and close with DC power, so they are not of concern. Unit-1 IC, on the other hand, had two AC driven vales one each on the upstream and downstream of the IC pot both inside the CV. These valves required AC power to be popped. During normal operation the CV is filled with nytrogen gas and operators cannot enter it immediately after an SBO. In additin, the IC piping was located on a high level of the reator building and routing the AC power there was not easy. If these two AC valves had been modified so they could have been opened and closed from outside the CV with DC power, the propability of severity avoidance would have risen significantly.
Furthermore, the plant should have been better prepared against the case of late RHR activation (longer than 10hours) for some reason after high pressure coolding with IC (RCIC) or HPCI had reached their limits. In such cases, extending the allowed RHR preparation time with RPV depressurization through SRV, water injection from outside with Diesel driven fire pump (DDFP) or fire engine, containment cooling spray, or CV venting would be effective. The following process flow diagram shows these feasible life extension measures. 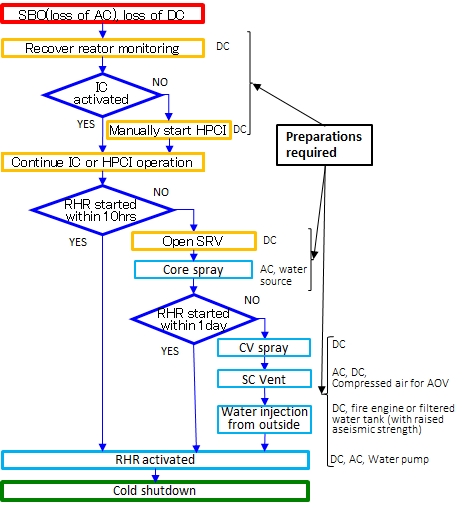 The cooling from outside would last for days as long as a cooling water source was available. The above discussion means that for 1F to certianly reach cold shutdown, it had to have prepared the following:
Assessing how far to prepare would have required evaluating probabilities of succeeding the above procedures. These measures are limited to evaluating Fukushima-1. They do not necessarily mean sufficient preparations for other plants that are now awaiting restart. Other planst should learn from the lessons of Fukushima and in addition to preparing seawater barriers, no matter how tall they may be, assume tsunami waves that go over them and assess if their preparations are sufficient even in such cases. 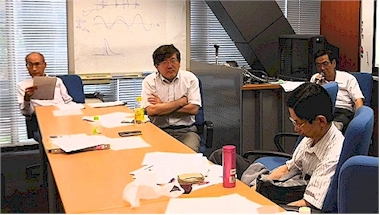 Copyright©2002-2015 Association for the Study of Failure